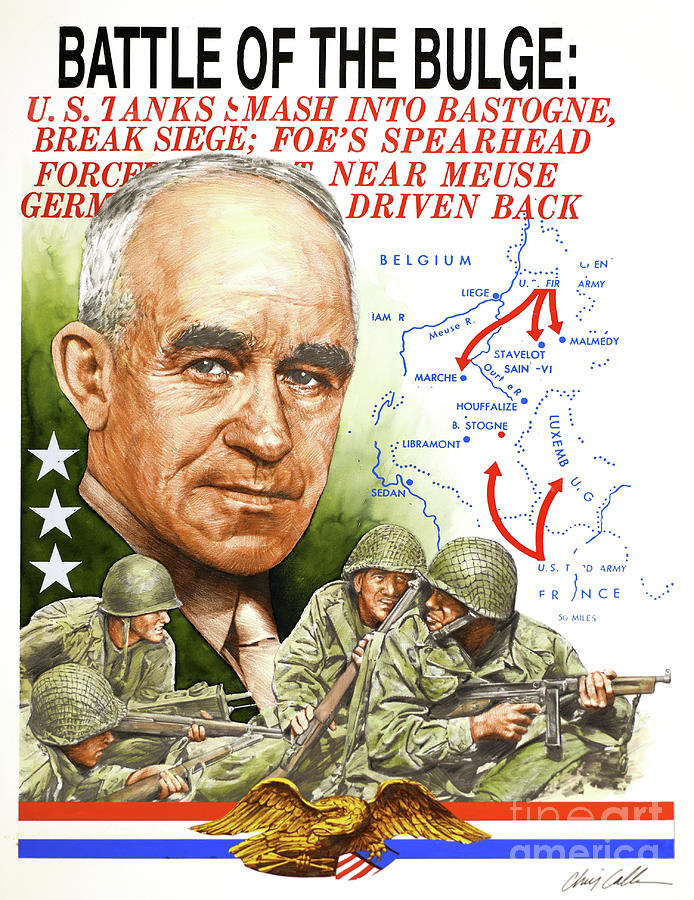 On the morning of December 16, 1944, secretly massed German artillery opened fire on the thinly spread American defenders in the Ardennes. Operation WATCH ON THE RHINE, the Third Reich's last desperate gamble to save itself by forcing the Western Allies to make peace had begun. When the four-hour bombardment ended, German infantry and tanks, led by SS General Josef Dietrich, began advancing through the woods and hills of the Ardennes to seize bridges across the Meuse river between Lige and Namur. The German advance against the badly outnumbered Americans, fighting in mud, snow and bitter cold, was rapid at first. By late December, a 50-mile "bulge" had been created in the Allied lines. With St. Vith taken and Bastogne surrounded, it looked like Hitler's final gamble might pay off. Capturing Bastogne would give the Germans access to many roads leading in all directions, allowing them to move almost at will. But the men of the 101st Airborne Division, under Brigadier General Anthony C. McAuliffe, fought back doggedly. McAuliffe's famous response to the German commander demanding his surrender was "Nuts!" Helped out by General George S. Patton's tanks and infantry, Bastogne held and McAuliffe was later awarded the Distinguished Service Cross. By early January the fight had turned against the Germans. By the end of that month German forces had been all but destroyed and the "bulge" squeezed out.

Artwork Copyright © 1994 Wind River Studios Holdings, Inc. All Rights Reserved under United States and international copyright laws. You may not reproduce, distribute, transmit, or otherwise exploit the Artwork in any way. Any sale of the physical original does not include or convey the Copyright or any right comprised in the Copyright. WRSH Stock Number XB14763