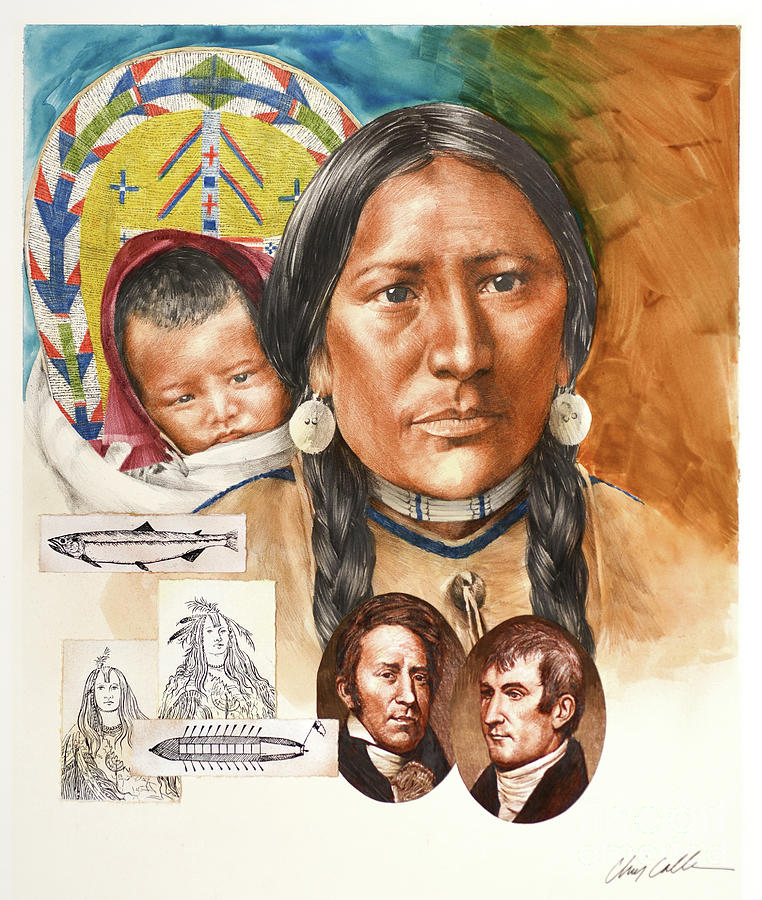 Only a few years of Sacajawea's life have actually been documented, but in that span of time she left a lasting mark on American history. She was born around 1790, daughter of a Shoshone chieftain. At about the age of 10, she was captured by a Hidatsa raiding party. A few years later the Hidatsa sold her to Toussaint Charbonneau, a French-Canadian, who took her for his wife. During the winter of 1804-05, Charbonneau was hired by explorers Lewis and Clark as an interpreter. A few weeks before the expedition was to leave from Fort Mandan, Sacajawea gave birth to her first child, a son named Jean Baptiste. When Lewis and Clark headed upriver in April 1805, Sacajawea was the only woman to accompany them, carrying her infant in a cradleboard on her back. Since the Indians perceived a woman with a party of men as a token of peace, Sacajawea was held in high regard by the group. But she was also respected for being hardworking, intelligent and loyal. When the expedition encountered a party of Shoshone, Sacajawea was overjoyed to discover that its chief was her elder brother Cameahwait. After a tearful reunion, she chose to continue on toward the Pacific with her husband. On the return trek, the three Charbonneaus left the expedition. Here, the story of Sacajawea grows murky. Some say she died of "putrid fever" at Fort Manuel in 1812. Others claim she lived for some time among the Comanches before returning to her own people on the Wind River Reservation in Wyoming, where she died in 1884.

Artwork Copyright © 1994 Wind River Studios Holdings, Inc. All Rights Reserved under United States and international copyright laws. You may not reproduce, distribute, transmit, or otherwise exploit the Artwork in any way. Any sale of the physical original does not include or convey the Copyright or any right comprised in the Copyright. WRSH Stock Number XB14848